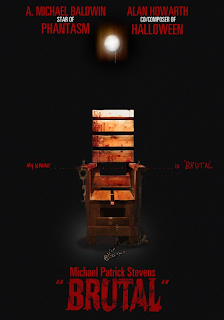 Brutal will be making it’s Texas premiere during a two night screening on December 7th & 8th at 7pm at the Angelika Film Center in Dallas, Texas. Director and actor Michael Stevens, star A. Michael Baldwin (Phantasm) and composer Alan Howarth (The Thing, Halloween) will be on hand for a Q&A immediately following the film on both nights. A raffle and silent auction will be held with items signed and donated by many of your favorite horror celebrities with all proceeds going to Operation Kindness, North Texas’ oldest and largest no kill animal shelter and For Those in Need, a Portland, OR based victims of violent crime organization.

Tickets are $15.00 and will be available at the door or to reserve your seat early, you can preorder tickets by visiting the Twisted Central event page at http://www.twistedcentral.com/p/events_3.html