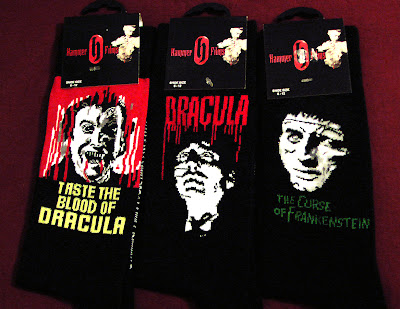 These spooky socks, made by Hammer Films, feature Christopher Lee as Count Dracula (Dracula and Taste the Blood of Dracula) and The Creature (The Curse of Frankenstein). They pretty fantastic and, although I don't know if I'll actually wear them, they were given to me as a fun novelty present and I love them! 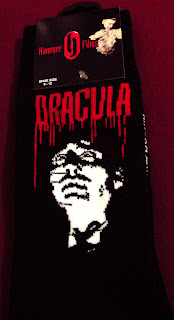 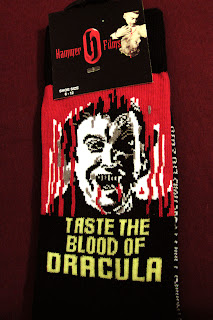 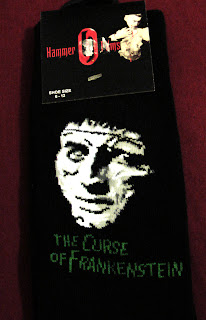 Email ThisBlogThis!Share to TwitterShare to FacebookShare to Pinterest
Tags: dracula, fashion, hammer horror, socks, taste the blood of dracula, the curse of frankenstein 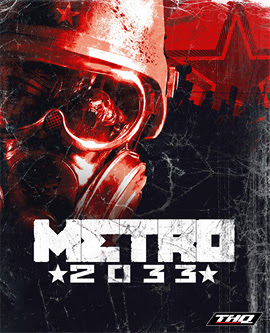 At the moment THQ are running a free giveaway of the apocalyptic  horror game  Metro: 2033. It's based on the novel of the same name by Dmitry Glukhovsky. Set in a future where nuclear war has forced humans to live underground, it tells the tale of survivors in Moscow who live in the underground metro away from the animals and humans on the surface who have mutated into monstrous forms.

To get the game you have to head to THQs Facebook page to see the promotion! Stocks are "limited" so hurry hurry hurry!

However, if you don't mange to get a copy from there, there is also the THQ Humble Bundle, from which you can also get Metro 2033 and 5 other games for $1! The other games aren't really horror, though I suppose Red Faction: Armageddon has aliens, and in Darksiders you play as one of the Horsemen of the Apocalypse! That promotion ends in 26 hours.

Book Review: To Evil Comes a Daughter by Allen Carraway 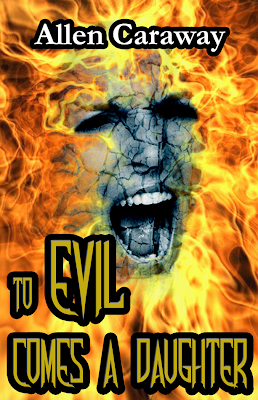 Released in 2012, To Evil Comes a Daughter is a paranormal mystery novel by Allen Caraway.

"English magazine journalist, Sam Munro, is in Montana interviewing classic car collector, Doug Bamber, for an article when, to his horror, he discovers that his hotel is haunted, the paranormal activity terrifying him, and the disruptive and restless ghost pursuing Sam wherever he goes.

To Sam’s astonishment, he also learns through Doug that a murder committed seven years earlier is directly linked to his tormented youth, catapulting him into a maelstrom of terror and vengeance when retired Chicago homicide detective turned PI, Gunther Parkinson, asks Sam to assist with his investigation. As he uncovers a horrific trail of violence and deception, Sam discovers that he has trusted the wrong person, and he could be the killer’s next victim..."

The plot of the book is quite standard for the paranormal mystery / detective genre; an unassuming, skeptical main character is pulled into a dangerous situation by visits from an unnerving spectre. However, the identity of the paranormal presence is unexpected, mainly because it is a character who is not previously introduced. This is also true of the name of the killer as well, with double identities and coincidences being vital to the plot.

Unfortunately, some of the coincidences seem somewhat forced and far-fetched, serving only to create a twist at the end. The title of the book, too, is taken from one line in the book that seems thrown in specifically to create a catchy title rather than any other reason.

Having said that, Caraway's writing style is wonderfully descriptive; he creates the beauty of the landscape in Montana just as vividly as the horror of gory murder scenes. However, the details don't become tedious and are punctuated by character developing dialogue and internal monologues. This is especially well done with the conversations between Sam and Doug, as they not only help to flesh-out the two friends, but also the other people they meet / know and discuss. It also ensures that all the characters introduced are more than just one dimensional husks and helps to keep the plot moving.

As well as great descriptions, the use of humour to break up the dramatic and traumatic scenes is effective and makes the book a little lighter than it would have been otherwise. Some of the jovial dialogue does seem a little inappropriate for the moment it's used in, but in general, it's well-timed.

To Evil Comes a Daughter moves at a good pace, has characters with whom it is easy to sympathise and reading it is enjoyable throughout. Even though there are some plot holes and predictable storylines, overall, the novel is a solid, well-written paranormal thriller.

Hello fellow bloats and what nots, here on ZombiCV we have a great deal going on! Introducing the new, rotten, deliciously filthy, Z O M B I E BACK SCRATCHER!
This item, is just ideal for all you bloats who are quite unable to scratch their backs and other parts below their belly. Not only is this item ideal for scratching, but as well as harassing people sexually! Wink wink at you perverts out there!

Life is so much easier with a back scratcher, wouldn't you agree? Well? What are you waiting for? Click now! This item could be yours! Just go on and click!

Games: War For the Overworld


I have some extremely blood-dripping news for all of you (especially) Dungeon Keeper-, Overlord-, Evil Genius-fanatics! For years us Dungeon Keeper fans have hungered for the next sequel to Dungeon Keeper 2. Well, that will probably never happen, but wait! Here is the next best thing. I have for quite some time followed this team who are re-creating the atmosphere of all those games we used to play for hours and hours. The game is called War For the Overworld. Subterranean games has started a Kickstarter page, in order to make the game happen. For further information on the game, donations, etc. please click here. 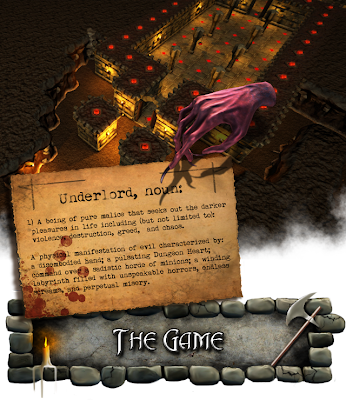 I cannot even express my excitement over this game! August 2013 cannot come soon enough.