Last month we wrote about Natalia Hernández González, an up and coming, spooky Spanish artist, whose mixture of childlike and macabre make her pieces both fascinating to look at and slightly unsettling. This month, HSL has had the opportunity to interview Natalia and find out what inspires her work.

- Firstly, thank you for doing this interview. Please could you introduce yourself for those unfamiliar with your work?
My name is Natalia; I always liked drawing, painting... art in general. I studied Fine Arts, but during the degree I was not sure what I wanted to do. In the last course I discovered the illustration world, and I haven’t been able to escape since then, nor have I wanted to.
When I started painting I realized paintings like a cloth doll hanging from the neck. This doll appears in several other pieces. Obviously, or not so much, almost anyone liked this kind of art.
People ask me very often why I draw these things, and not cute others. Well, I consider that I do esthetically nice characters and scenes, but most of the times the background is dark and sinister. I love this contradiction; this is all, nothing more. I love it.

I created the Spooky Delight blog around two years ago. I update everything I do. I would like to work as an illustrator, and since then I’m drawing daily (more or less) to get it.

And because of people like all of you, I am really pleased to do it.

- When did you first realize you wanted to be an artist?
First of all, thank you for calling me an artist. At the moment I don’t consider myself as an artist, I simply love drawing, and I love my little creatures.
I always known I would like to work in something that I liked, and there is nothing I like more than this.
Also, I like drawing since I have memory.

- Are there any other artists whose work you particularly enjoy?
There are innumerable artist I admire: popular artists and others not so well-known, and from different disciplines, as Tim Burton, Mark Ryden, Roman Dirge, Gus Fink, Ray Caesar, Nicoletta Ceccoli, David Stoupakis, Chet Zar, and a very large etc.

- Have they been influential to your style?
Of course. Always has to be a start.
My beginnings were investigating those artists because I liked their work. My style is a consequence of investigating them but it is not in a deliberate way. I learn something from every one of them, it’s such  subliminal messages in my mind.

- What else inspires you when creating a piece?
My state of mind. I recognize that not always I can draw as I want, because I’m obligated to do more commercial things.
Drawing is my therapy to escape this suffocating world. I know that it’s not the correct way, but usually, when I draw only for me, I don’t think what I’m doing: without a sketch, I grab paper and pencil, or computer and tablet, and it simply appears.
In addition, I have a file with different pictures that I collect. When I’m blank I use to review this file to inspire me.

- Some of your pieces, such as 'Balance' have a specific theme and message. Is it important for your audience to understand the meaning or are you happy if they simply enjoy the aesthetics?
No, it’s not important for me that everybody understands what I want to say. It’s funny when they give me their different points of view. ‘Balance’ is for a contest with a specific theme, but it’s not usually that way, only if it’s for a request or similar.

- If you had to describe your art in five words, which five words would you choose?
Sinister, childhood, cute, tragic, fun.

- A lot of your pieces are simultaneously creepy and cute. Is it difficult to maintain the balance between those elements?
It’s not really difficult; I do it without thinking about it. A trick is including strange or dark elements in an inappropriate scene.

- Does the "creepy-cute artist" box ever confine what you create, or do you simply paint / draw whatever you're inspired to paint / draw, regardless of the label?
I never think about it. I only draw, I don’t care about labels, but I like to move through these two words: creepy and cute.

- As well as painting from your imagination, you take commissions from clients. Is it difficult to work around someone else's ideas, or is it fun to produce designs in styles that you might not have tried otherwise?
Both parts have enough weight. It’s difficult to work through the eyes of a customer, but it supposes a funny challenge. Sometimes, as you say, I discover or learn something new, and these little things ends in a big learning.

- What's the most interesting commission you've been given so far?
I worked on the illustration of a children's book, and I really liked the illustrations and the story. It wasn't as dark as others, but I’m very pleased with the results, I think they illustrate very well the most important moments and still keep the spooky style.

- Over the years, you've been using digital painting more frequently. Do you prefer it to "traditional" mediums (acrylics, watercolours etc.)?
I like painting with both mediums. Lately I draw with the digital way due to the small space that I have, but sometimes I need to change to watercolor or acrylic, I miss it. Sometimes I also need the fast results of the watercolor, or its organic shapes.

- How else has your style changed since you began professionally?
Modestly, I think that I have been improving over time technically, and the scenes are more subtle than before but more sinister too (especially the more personal work).

- What's the best thing about being a professional artist & designer?
The best is looking back and see what you have learned and improved. Those little things you learn while working, really show the difference with older work.

- And the worst?
I think the worst is the hard effort of sending the work, trying to show it to as many people as possible, and being rejected in some places.

- When you're not creating, how do you like to spend your free time?
When I’m not creating I’m sending e-mails with portfolios, with CVs, speaking with potential clients etc. But in my free time I like listening to music, going out with my friends, and taking care to my small pets: a white bunny and a black ferret.

- Lastly, could you give a message to any fans of your art?
I would like to thank everyone who sees and likes my pictures. The work comes really alive when there is other people that talk about it.

Many thanks to Natalia for the interview!
You can check out more of her work on the websites below: 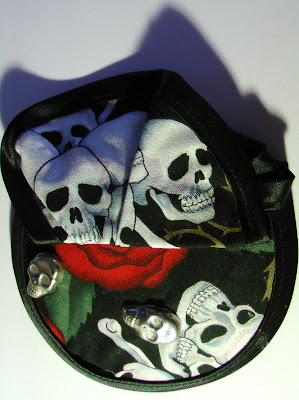 This fantastic skull and rose print fascinator was a gift from my sister last year, but I only just got around to posting about it here. It's by a UK-based designer and milliner called LuLu O'Neill who trades and teaches hat-making classes in Spitalfields Market, London. I love it!

For more information on LuLu O'Neill's work, you can visit the sites below:

Janine Basil Hats is a London-based company that specialises in hats, fascinators, masks and hair accessories of all kinds. Designed and hand-made by Janine Basil, they come in a huge variety of looks, including several spooky styles!

To get your claws on some of these gore-geous goods or to see more, check the sites below! The brand ships internationally and the items available are updated frequently.

DAMN RIGHT! Now it is your chance to finally hide your hideous feet with these GORElicious zombie slippers. These tastefully brainless slippers can be bought from Think Geek!


Some of you may remember the game Dead Island (it wasn't that long ago...last year). It's a rather simple game where you fight off hordes of the recently undead. As there aren't many guns, most of the time you fight with knives and sticks and things laying around. It's pretty buggy (ok it's really, really buggy) and the actors are all annoying, but somehow it's still strangely enjoyable!

Anyway! This time they have decided to expand on the earlier Dead Island with Project Hell, by placing it in a "dark fantasy" world of undead, necromancers and demons. It's still in production, but it might be good. Or it might be bad, it's hard to tell at this point. (or it might be bad, but still strangely enjoyable!):
﻿


"We want to travel back to the times when enemies were really hideous and repulsive, the fights were brutal and bloody and the gameplay was challenging and rich with secrets waiting to be uncovered.

It was natural for us to think in terms of a dark horror setting. Mostly due to Dead Island but also because we’re lucky enough to remember the first Quake and Diablo and the impression these games made on us – so few new games can keep up with these classics.

While searching for a dark and mature mood we are constantly referring to early European medieval times. It was a time when a lot of people were torn between Christianity and pagan habits – they attended masses but kept casting curses, asking oracles for advice all the while living in fear of necromancy. This gives us a believable base to build up a setting with grounds for magic bound with the evil side.

On the other hand, we’re not looking for cheap controversy by putting in religious symbols and desecrating them. With respect for our players’ beliefs we’re creating a completely new, brutal, dark and gory world based on a universal dichotomy between good and evil.."

They also say not to expect "unicorns and fairies" which I personally find scarier...


Theres no indication of when it will be released, but you can keep up to date with the production at the official blog, entitled "sharpen your axes"!
Project blog

More design artwork after the break: