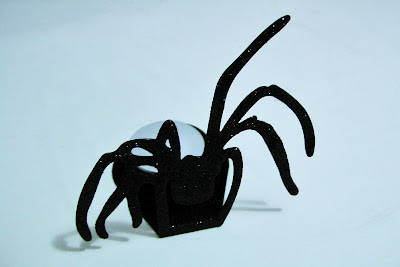 Halloween is fast approaching (finally!) so there will be quite a few posts about Halloween haul over the next year month here on HSL. I've decided to start with this little creepy-crawly candle holder, since I know how much you all love our arachnid friends! (They're adorable. Seriously!) Anyway, this is called a Shocking Shadow Maker and it's from a shop called Marks & Spencer in the UK. 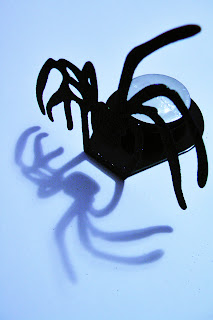 In a softly-lit scenario it's glittery and unassuming, adding a subtle scariness to your decor. However, when back-lit it casts a shadow that's sure to send cold shivers down any arachnophobic's spine! The position of the legs - with one raised a little higher - particularly makes it startling I think. 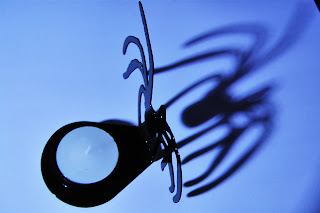 It comes with a tea light candle in the holder, which is supposed to provide the shadow-casting illumination. However, if you don't want to light the wick, the same effect can be achieved by simply shining a well-angled lamp at it. 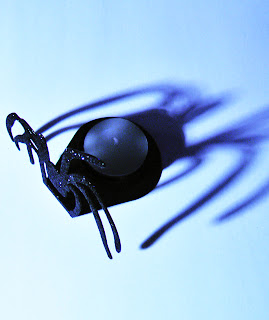 Obviously, white / light backgrounds work particularly well with this item, as both the candle holder itself and the shadows are dark. However, if you use the candle provided, the silhouette can be seen in the shadow maker's self-produced glow, even against a black backdrop (though in my great wisdom, I didn't take any photographs of that...). 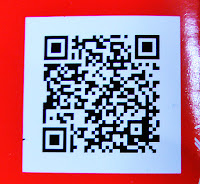 As well as the main product, on the label tied to it, there is also a mobile phone tag, which you can scan and be taken to a short, animated Halloween song / video. It's just an extra little Halloween surprise to make you smile.

Marks & Spencer don't seem to stock this particular item online (I bought it in-store), but they do have other Halloween goodies in their webshop: HERE. I guess if you're from the US, this will seem like a poor selection, but to be fair Halloween still isn't that popular over here and M&S do carry lots more in their physical stores. :)
Posted by Lilia Tombs at 06:08