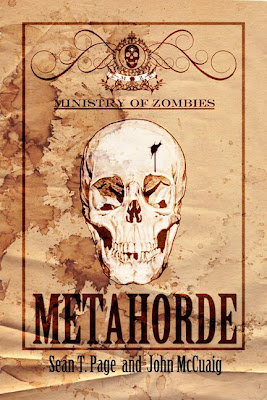 "The year 2020 was a good one for the walking dead.
The initial reports of a mysterious plague reanimating corpses caused unbridled chaos and as the world descended into hell, nations turned on each other in the battle to survive. Europe is devastated.

The remnants of NATO managed to create safe zones within cities that still had the protection of medieval built stonewalls. Once again, these ancient bastions were a sanctuary from invaders, keeping back the dead legions. The rest of the continent was a dead zone - populated by hundreds of millions of walking corpses.

The medieval fortress-city of Carcassonne, in Southern France, became the headquarters of the living but as the last pockets of human survivors rebuilt the fragile framework of a new society, one man discovers a terrifying secret. So far, what has happened is only the beginning.

The dead are clustering in massive numbers. Mere walls can't defend against the overwhelming force of the meta-horde."

For a chance to win a copy (paperback) of the zombie novel Meta-Horde by Sean T. Page & John McCuaig, you can enter the giveaway below: