Hello there my spooky kids!
I'm spamming you with movies lately but I just feel there are a bloody great bunch coming out this year!
This time, I'm gonna introduce you to "Warm Bodies". 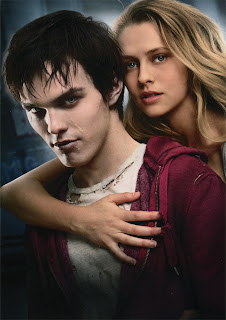 Being totally honest, this movie first caught my eye because of its main actor, Nicholas Hoult, who stole my little heart in the first season of the TV series "Skins", but after reading the synopsis it's not just him starring in a horror movie what makes this movie appealing for me:

" After a zombie becomes involved with the girlfriend of one of his victims, their romance sets in motion a sequence of events that might transform the entire lifeless world. "

Romance between a zombie guy and a human girl? It really doesn't sound like the typical zombie film does it?
"Warm Bodies" directed by Jonathan Levine will be released the 10th of August this year.
Posted by Vicky Spooky at 09:06